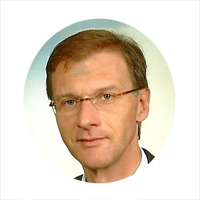 "The Global Energy Parliament is giving us the means to understand that the whole world is one, and to advance medicine beyond the limits of standard diagnosis and treatment.  When we understand that energy is universal, we can accept that negative energy, such as disease, is merely an opposite to positive energy, both of which are integrated in the universal energy. The treatment of chronic diseases, especially cancer, can surely be improved with such methods that work with this greater awareness of energy, such as acupuncture, magnetic field therapy, therapeutic touch, Quantum Healing, universe frequencies, scalar waves, and zero point energy.”

Dr. Reuter is a Founding Member of the GEP and has participated in all of the annual international sessions of the Global Energy Parliament since its inception, in India, Germany, France and UK. He was also a guest speaker at the Inauguration of the GEP Germany Centre and several of its Symposiums.

Dr. Reuter completed his medical studies at the University of Greifswald in 1986. In 1993 he was established as a homeopathic physician specialized in pain therapy, cell therapy, anti-cancer medicine in the interdisciplinary hospital "Klinik im LEBEN" (“Clinic in Life”) in Greiz/Thuringian Vogtland.  Since 2001 he has been the Medical Director and head physician at the Clinic.

Dr. Reuter is known for having developed the first procaine-base infusion, a special type of infusion therapy. He also was the first to use permanent perfusions on patients.

In addition to his time at the Clinic, Dr. Reuter spends considerable amount of time lecturing and conducting advanced training in Germany and abroad.