The "I-Theory" is the central concept of the Global Energy Parliament, first presented by GEP's Founder, H.H. Swami Isa in 2010.

The "I Theory" is a unifying theory of science. A unifying theory, or 'theory of everything' is a single, all-encompassing, coherent theoretical framework of physics that fully explains and links together all physical aspects of the universe.  It is therefore the end to the quest of every branch of science; or rather, a unified answer.

Several theories of everything have been in existence in Western Science from the time of Archimedes to today’s String Theory. A few qualities of the “I-Theory” distinguish it from others:

The “I-Theory” explains that the two realities about ourselves and our universe are one and the same. Energy is every matter in existence. At its core, every matter is vibrating, and vibration itself is Energy.  The fundamental unit, or the “seed” of this vibration is the “I-particle.” These particles cannot be created, modified or destroyed. The “partner” of energy is Consciousness. Energy and Consciousness exist simultaneously and interdependently, just as sugar (the foundation) and sweetness (its expression). At their innermost core, we can say the foundation (Consciousness) and its expression (Energy) are the same, which means that each of us is essentially the larger whole, the complete system.

“An analysis of SARS-CoV-2 on the molecular and subatomic levels through applied I-Theory” by H.H. Swami Isa and Christophe Dumas, published inAdvances in Microbiology (2021)

"Entropy and Negentropy Principles in the I-Theory" by H.H. Swami Isa and Christophe Dumas, published in the Journal of High Energy Physics, Gravitation and Cosmology (2020)

"I-Theory: A Unifying Quantum Theory?" by H.H. Swami Isa and Christophe Dumas, published in the Journal of High Energy Physics, Gravitation and Cosmology (2019) 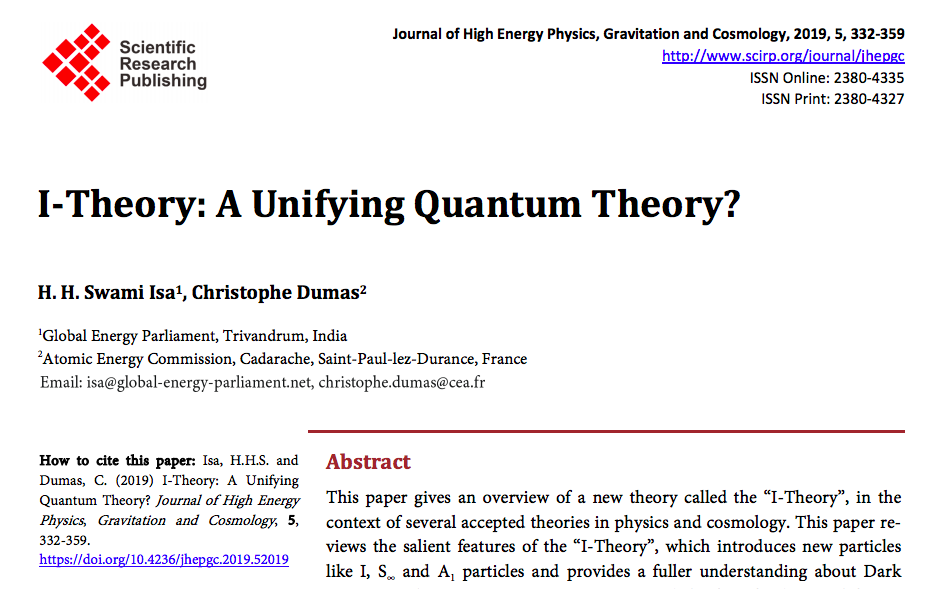