The Benefits of Vegetarianism from a Scientific Perspective

Talking about the benefits of vegetarianism often becomes a discussion about beliefs or ethics. However, it can also be discussed from a purely scientific perspective. The I-Theory explains how nature is affected by changes at two levels: gross level and subtle level[i]. In this article, we observe the effects of consuming non-vegetarian food on these two levels, and conclude that decreasing the consumption of non-vegetarian food would greatly increase the overall positive energy in the human being.

A. Gross Level: Atoms and Larger

At the gross level, the influence of a vegetarian diet can be observed in the endocrine system and the hormone segregations. This include the chemical reactions at the atomic level.

At the gross level, the human body can be considered a chemical factory. Every single activity in the body is executed by an interchange or reaction between chemical substances. At the level of atoms, molecules, and larger compounds, chemistry is easy to observe. For example:

Dr. Arthur P. Arnold from the Brain Research Institute in the University of California Los Angeles (UCLA), in the book Hormones, Brain and Behavior, explains the influence of the endocrine system in the human being, and how the behavior in humans can be changed by modifying the levels of hormones[ii]. Adrenaline is the substance produced by suprarenal glandules in the case of great excitement or imminent danger. Cortisol is also produced in the suprarenal glandules to cope with the stress, threats and fear.

There are also “feel good hormones” like serotonin, dopamine and endorphin, which produce emotions such as the will to be active, motivation, or euphoria.

Animal physiology is very similar to humans, especially in the chemical perspective. Charles Darwin in his book The Expression of Emotions in Man and Animals outlined the similarities between man and animals. His theory has been scientifically supported by many research studies[iv].

The endocrine system in animals acts in similar way to humans. The body of a wild boar running for its life at the time of being shot by hunters is full of fear and adrenalin (which is known to give a bitter taste to wild meat)[v]. Also, the body of a sheep being led to slaughter has plenty of cortisol at the time of its death[vi],[vii]. Not only this, but the fear, apathy and depression that animals suffer in the stables throughout their lives may represent an even bigger impact in their bodies than how they died[viii]. These feelings make their bodies suffer a lack of tyrosine, which is necessary to be alert and active[ix].

Some farms are known to change the conditions of the animals before slaughter because it is believed they will taste better.[x] This demonstrates that animal’s emotions influence the chemistry of its dead flesh.

When a human eats the flesh of a slaughtered animal, the excess of adrenaline and cortisol with a deficiency of tyrosine will unbalance the levels of hormones in the human body. In addition, the low levels of tyrosine in animal farmed meat may cause humans to reach low levels of the hormone responsible for active vitality.

Additionally, it is well known by today’s consumers that growth hormones and other hormones are injected into animals to produce more meat and milk. Consumers have been concerned about the effects of ingesting these excess hormones. In the U.S., for example, eighty percent of cows are injected with growth hormones to increase the meat production, which is why American milk is banned in Europe, Canada and many other countries.[xi],[xii] The consequences of unbalanced hormone levels in eating animals are severe in humans. Injected hormones have all been blamed for causing cancers like breast cancer and uterine cancer, developmental problems in children, early onset of puberty, birth defects, and increasing incidence of reproductive problems, on the hormones in meat[xiii],[xiv].

Further, mental diseases in humans are drastically increasing[xv], especially in countries with generations of consumption of factory farmed non-vegetarian food, and it is believed  this is one reason why. 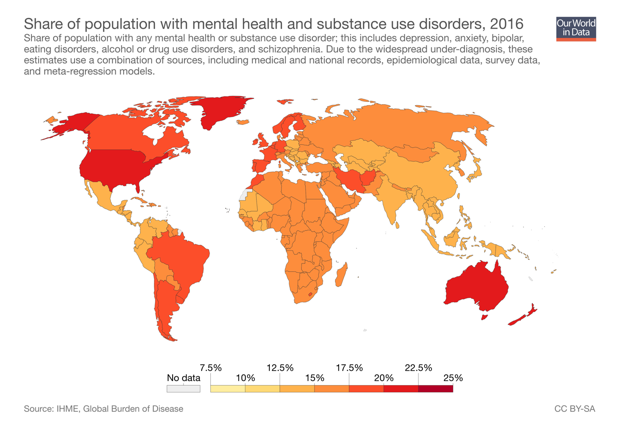 Fig. 1: Share of population with mental health and substance use disorder 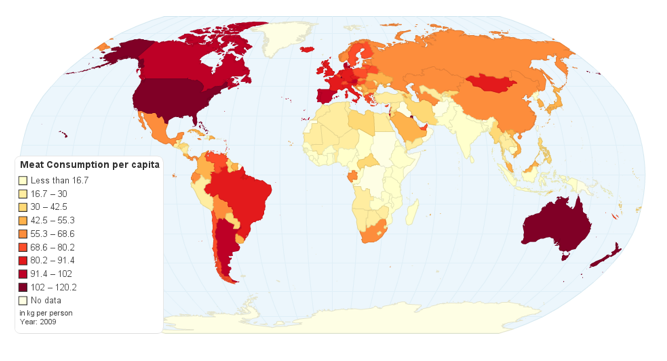 Apart from these chemical reactions at a gross level, animal meat consumption has implications at a subatomic level--the subtle level.

At this level, one must consider wave-particle duality, because everything is vibration from the subatomic point of view. In His Holiness Jagadguru Swami Isa’s I-Theory, the subtle level is concerned with the vibration of subatomic particles and electromagnetic waves[xvii].

As explained by Swami Isa, the fear of the animal at the time of its slaughter produces a high amount of black matter in the subtle plane. When a person consumes the flesh with black matter quality dominating, through the digestive process, that negative quality is also transferred to the human being, and the new subtle vibration is dominated by negative energy.

Plants, however, do not experience fear the way that an animal does when it is killed. This is why plant food generally maintains white matter domination, but meat from an animal which died in fear or stress is black matter dominated.

As Swami Isa says, modern human beings’ main source of energy is food, and therefore the quality of the food’s energy should be positive, if we want a positive life.  Decreasing or even eliminating the consumption of animal-based food will help humanity achieve the lifestyle and emotional balance it is looking for in so many other ways.

If a majority of human beings ate positive food, they would be overloaded by positive rather than negative emotions from their food, and they would learn to develop compassion for the problems around them. Eating balanced food, they would have the vitality to act with a sense of service towards society and other forms of life. With this service approach in mind, the person will experience a sense of plenitude that few other activities would provide.

So, next time you are thinking about what to eat, think about how you want to feel!

Ricardo Jiménez is a GEP member deeply interested in yoga and vegetarianism. He is leading GEP’s campaign in Spain and Germany to spread the benefits of vegetarian diet, based on the teachings of His Holiness Jagadguru Swami Isa, the Founder of GEP.

[iv] Veisser I and Boissy A. (2007) Stress and welfare: two complimentary concepts that are intrinsically related to the animal’s point of view. Psychology & Behaviour 92:429-433

[viii] Grandin, Temple. “The Effect of Stress on Livestock and Meat Quality Prior to and During Slaughter.” (1980). The Humane Society Institute for Science and Policy. https://animalstudiesrepository.org/cgi/viewcontent.cgi?referer=&httpsredir=1&article=1019&context=acwp_faafp

[xi] “US and Europe Agree to Disagree on Safety of Dairy Hormone.” (1999) Consumer Reports. https://advocacy.consumerreports.org/press_release/u-s-and-europe-agree-to-disagree-on-safety-of-dairy-hormone/

[xii] “4 Health Reasons for Why American Milk is Banned in Europe.” Lifehack. Retrieved on 1 February 2019 at https://www.lifehack.org/289935/4-health-reasons-for-why-american-milk-banned-europe