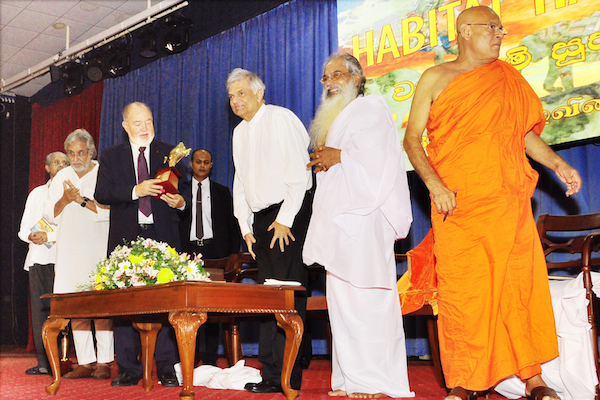 The 7th Global Energy Parliament was inaugurated by the Hon. Prime Minister of Sri Lanka, Ranil Wickremesinghe. About 500 people attended the event on December 11 at the Banquet Hall of his residence, Temple Trees, Colombo.

The Hon. Prime Minister expressed a warm appreciation of the GEP’s vision of world harmony through energy balance, and also emphasized that “If we want to achieve development, we need to maintain environmental, habitat, religious and ethnic harmony.”

In his Founder’s Address, His Holiness Swami Isa said, “Without knowing what it means to be human, without knowing the science of energy flows in habitat, we cannot achieve any lasting harmony—in home, society, nation or world. This is our work today.”

Sir James Mancham also received from the Prime Minister the GEP Lifetime Achievement Award at the function. (See full story here) Two books by His Holiness Swami Isa were also released at the function: “Education for Total Consciousness,” published by IVPT, and “Saphalamee Atmeeye Yatra (Fulfillment of the Divine Journey),” published by the Kerala Bhasha Institute.

This 7th session of Global Energy Parliament was conducted on the theme, “Habitat Harmony,” following the UN Habitat III conference in Quito.

The Inauguration preceded the session of parliament in which members and ministers from all sectors of society, discussed and forwarded Resolutions for a holistic, scientific and rational solutions for creating global harmony in habitat.

The parliament concluded with a dazzling Cultural Performance by the Sri Lankan Navy, featuring 171 artists.

The Global Energy Parliament was conceived by His Holiness Swami Isa as an international assembly of volunteers who have a right and a responsibility to the world. GEP is organised by the Isa Viswa Prajnana Trust (holding Consultative Status to the United Nations ECOSOC) and this event was co-organized the Interfaith Coalition for Peace of Sri Lanka. Additional support was received from the UNESCO’s World Academy of Sciences (TWAS), EHRT Maschinenbau and Personal-Point.