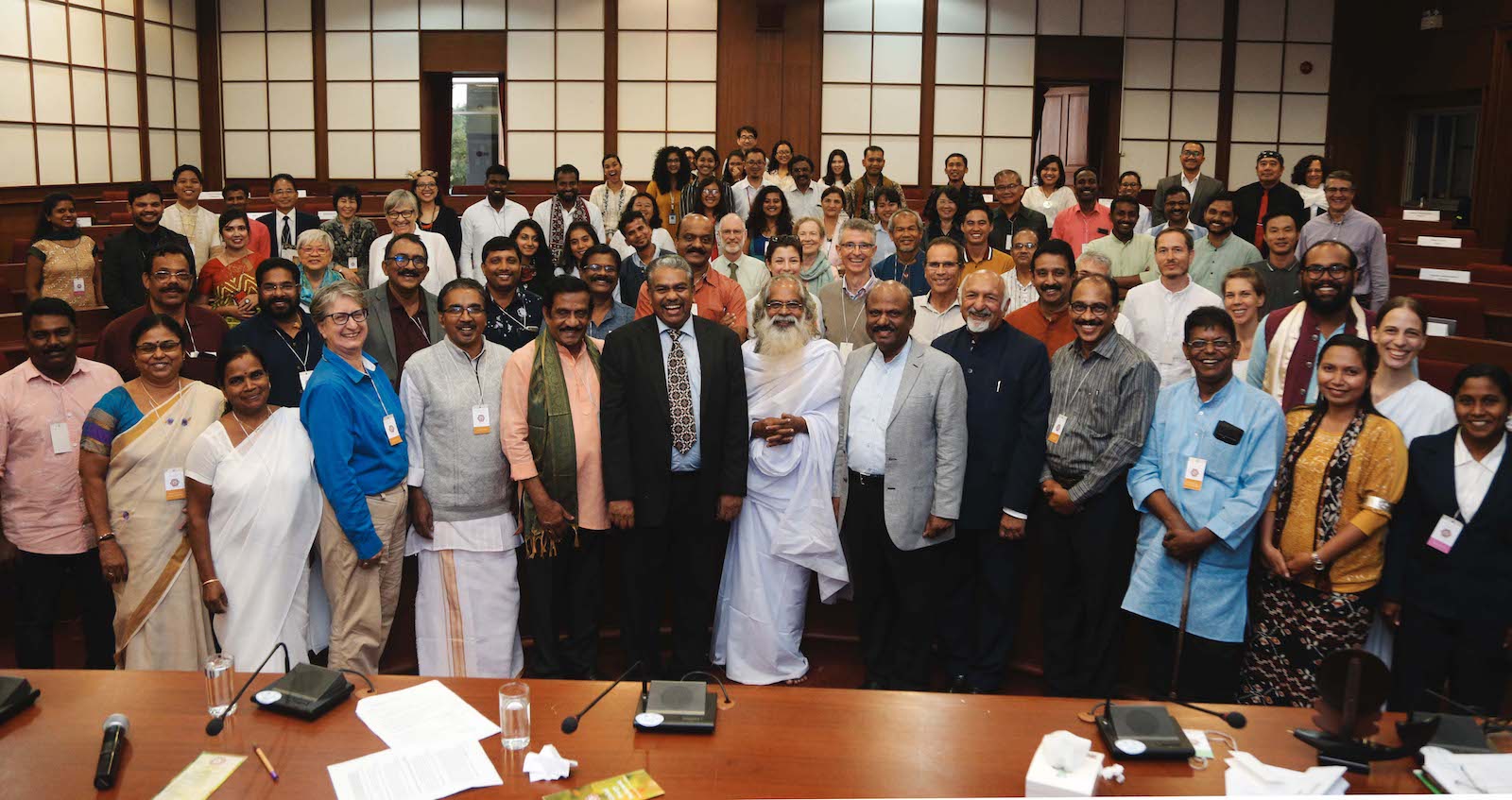 The 9th Global Energy Parliament was held in Chiang Mai, Thailand on November 5, 2019 with participants and interfaith leaders from 21 countries. It was co-organized with the Christian Conference of Asia and the World Council of Churches’ Eco-School. GEP 2019 focused on the theme "Living in Harmony with Nature."

The GEP Founder, Jagadguru Swami Isa, set the tone with his Founder’s Address during the inaugural function. “All forms of life are closely bound with Nature, for there is no life without Nature and no Nature without life. The natural and social devastation which we see around us today is caused by a consumer thought culture which says that Nature is a product to be exploited, abused, and used in diverse ways,” he said. “Education which teaches that the individual is detached from his external world leads to this sorrow.”

Swami Isa introduced a new concept of sustainability by explaining Entropy and Negentropy and the need for them to be kept in balance. According to Swami Isa, negentropy is the creation of the gross or atomic world, and is black-matter dominated. Entropy is the dissolution of material into the subtle, or creation in the sub-atomic world. Both are two ends of an ongoing cycle. Entropy is white-matter dominated, as more repelling space energy is present. Negentropy is black-matter dominated because more attractive, dense energy is present.

“Today, everyone believes that development is urgent and inevitable, and they are racing for intensive creations of black matter. More cities, more roads, more houses, more luxury items. All this needs to be balanced with entropy, or white matter subtle creations,” said Swami Isa. “That is the way to true sustainability.”

Swami Isa also taught that these high scientific concepts need not elude the common man. He said that you can feel your own energy pattern and discern whether it is black or white matter dominated simply by putting your hand over your heart. When you smile, or when you get angry, you will feel the difference.

A televised inaugural address was delivered by the Minister of State for External and Parliamentary Affairs, Government of India, V. Muraleedharan who congratulated Swami Isa and the Isa Viswa Prajnana Trust on its 9th parliament. The Minister pointed out that the theme of "Living in Harmony with Nature” was most appropriate given the contemporary challenges facing the world. He noted the contributions to this that India has made since ancient times. He said that the root cause of all this was disharmony in human living.

The Speaker of the GEP, Dr. C.V. Ananda Bose, noted the achievements of the GEP since its inception in 2000, and he lauded it for having provided a platform for transforming the ugliness of this world to create a ‘terrible beauty’ born out of such a convergence.

The Christian Conference of Asia Secretary General Dr. Mathews George Chunakara added that the affirmation of the GEP that “all human beings belong to one Earth, one Water, one Fire, one Air, and one Space,” and, “we are all global citizens sharing a common future”, captures the essence of true ecumenism. He noted that CCA was happy to host the parliament because of shared philosophy, ethos, and values with GEP.

Dr. Amnuay Tapingkae, President of the Payap University, was felicitated and awarded with the Isa Viswa Prajnana Trust’s Vidya Award in recognition of his lifetime achievements and commitment to education. He spoke about his four decades of experience and his passion for promoting truth, love and service through education.

Following the inaugural function, the dignitaries together planted a tree on the university grounds.

The procedures of parliament were followed led by the Speaker Dr. C.V. Ananda Bose and Deputy Speaker Dr. Kiran Vyas. Three Bills and a dozen Submissions were presented and unanimously passed, on topics ranging from forestation, to women’s contribution to ecological justice, to water justice and self-sustained living. Several youth members made submissions and gave amendments.

“We can really feel the spirit of unity in this parliament,” said Elias Wolff, a Professor of Theology and member of the Ecumenical Water Network. He had forwarded a bill on Forestry related to the Amazon Rainforest in his own country of Brazil.

“We need more events like this. The world is in a crisis and people don’t even know it,” said Jon Jandai, the founder of the Pun Pun Centre for Self Reliance in Thailand. He had forwarded a proposal demanding that governments provide for the basic human rights to food, clothing, shelter and medicine and that humans get back to the basics in being able to know how to attain those for themselves.

The Bills and Resolutions which were passed on Living in Harmony with Nature are presently being communicated to all governments worldwide and international organizations.